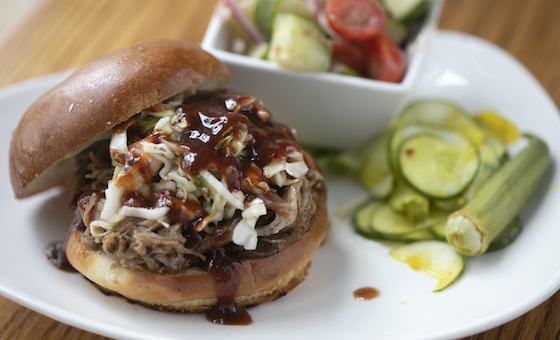 Did you know that you can find Kiawah Island award-winning barbecue inside the gates of the island? All Southerners — and most Americans for that matter — take their barbecue very seriously and have even been known to get downright defensive and uncharacteristically agitated when it comes to which strongly entrenched regional variation represents “real barbecue.” The difference is often in the sauce in and in the rub (or no rub, as the case may be).

But several common essentials bring consensus to even the most heated barbecue debate: like love, you can’t hurry barbecue. Any really barbecue, whether Carolina pulled pork or Texas beef brisket must be cooked low-and-slow over a hardwood fire burned down to coals. It’s that perfect combination of low heat and wood smoke that transforms meat into a succulently moist, naturally savory delight.

Dedicated barbecue aficionados generally adhere to two rules-of-thumb when pre-evaluating any barbecue joint — tricks of the trade, if you will: from the outside, does the building itself lean more towards (a) shabby or (b) chic; and upon approach is the site dominated by (a) a noticeable stack of firewood or (b) asphalt? If the answer is (b) in either case: keep driving. Fast.

So that raises an obvious question related to the topic at hand: can a person really expect to find award winning, authentic barbecue in a golf clubhouse? A fair question, but like everything there are always notable exceptions to every rule. If you count yourself among the sceptics, when you visit, at least drive to the clubhouse at Osprey Point and step out of your vehicle. When you catch the scent of pork-laden hickory smoke wafting across the parking lot, you’ll find your skepticism quickly subsiding. You’ll immediately know you have found the right place for Kiawah Island award-winning barbecue — Cherrywood BBQ & Ale House. The proof, though, is in the eating.

But don’t just take our word for it. Over the past several years the crew at Cherrywood BBQ & Ale House have been entering serious competitions on the barbecue circuit. Some recent successes include the People’s Choice Award for Best Pulled Pork at Smoke on the Harbor BBQ Throwdown (2017 and 2018); Best Bite at the Lowcountry Hoedown (2017); USA Today’s Winningest Food & Beverage (2017); and, most recently, the People’s Choice Winner for Best Pulled Pork at The 20th Anniversary Festival of Discovery BBQ Competition (2021).

And it’s not just the ‘que. Cherrywood’s Four Cheese Macaroni has reached near legendary status, winning both the People’s Choice Award and Critic’s Choice Award for Best Mac & Cheese at The Charleston Mac Off every year since 2014. Add to that Cherrywood’s astonishing selection of local, regional and national craft beers, impressive collection of bourbon and rye, and other delectable meats and sides.

So when you have a hankering for some authentically prepared, slow-cooked Southern barbecue and all the traditional accompanying sides while visiting Kiawah Island Golf Resort, you’ll be glad to know there’s no need to stray off the island.